Today’s GFS is predicting a nice snowfall Saturday night (see below).  Of course, a lot can, and will, happen between now and then.  But it is exciting to at least have the thought that we still could have a good snow before the season ends.  Unfortunately, the GFS stands alone at this time…the European model keeps the chance for significant snow north of us. 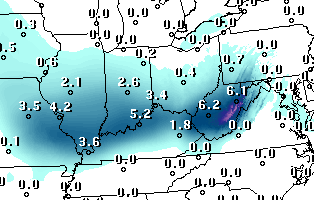 Stuff
Streetside parking meters are illegal in the state of North Dakota.

Charity begins in the home…in this case.  An 87 year old preacher and his wife run an on-line ministry as a “non-profit” organization.  Last year they reported a net income for the website of 7 million dollars.  Their combined salaries added up to $4 million.  That reminds me of the old joke about what to do with the offering plate each Sunday.  “i take the plate, throw it up in the air.  God takes his share and whatever falls back down is mine.”  Only is this case, it’s not a joke!

As mentioned on previous post, the southern Illinois/southern Indiana region as become the new “hot spot” for severe/tornadic thunderstorms.   Super cell now crossing the Wabash River about 40 miles northwest of Evansville has a history of tornado production and should continue to create problems as it continues on a line about 40 miles north of the Ohio River.  This system is moving into a more stable atmosphere so activity will slowly weaken as it approaches the I-65 corridor.

In addition a large cluster of thunderstorms over southwestern KY/TN will also be weakening as it moves about 40-50 mph toward the northeast.  This should be in the Louisville area between about 2 A.M. until 4 A.M.  Biggest threat for us from these storms will be heavy rains/flash flooding.

Finally, the cold front will bring additional thunderstorms across the area between 7 A.M. and Noon.  Once again, flooding will be the primary threat.