Severe storm threat has dropped to minimal, or less.

Situation is no longer “confusing” as the short term models continue to highlight the ideas presented earlier.  Some adjustments are needed to the timing, but the severe weather threat has moved to central Indiana eastward to central Ohio.  Severe storms are not expected locally.

8 P.M. to 10 P.M.:  area of showers/thunderstorms (mostly moderate to strong)  moves from west to east across metro area.  No severe weather expected.

Latest update based on short-term model and radar data…

1).  Most of the area (maybe all) should remain dry through at least 5 P.M.  Best chance for strong pop-up thunderstorms remains over Indiana.

3).  By 7-9 P.M. a large area of strong-to-severe thunderstorms will break out over northern TN and southern KY and move rapidly northeast between I-65 and I-75.  Threat of severe storms will lie south and east of a line from Bowling Green to Cincinnati.

4). By 7 P.M. a weak cold front will be crossing the Wabash River (Indiana/Illinois border) and continue moving eastward.  At this time the front could be producing moderate to strong thunderstorms.  As the front moves eastward, its moisture will merge with the system mentioned in #3 (above) to create a large area of rain with weak to moderate thunderstorms mixed in.  This area should drop plenty of rain over our area between 8 P.M. and Midnight.  Some minor flash flooding will be possible.

The atmosphere may, or may not, be primed for severe storms later this afternoon/evening.  The confusion was apparent yesterday as the GFS and NAM far apart in their solutions for today’s weather/thunderstorm possibilities – the GFS wasn’t too keen on severe thunderstorms while the NAM jumped on severe weather big time.  Today, the GFS and NAM are closer, but still at odds.  Meanwhile the short term models, while agreeing in general about how things will evolve, are also divergent about the expected strength of any thunderstorms.

Second,  we have strong upper air dynamics over the midwest working their way slowly eastward, but surface conditions are a mishmash ( a highly technical term) of ill-defined air masses, outflow boundaries, and, so-far, ill-fated attempts to form a surface low pressure center and a cold front.  It looks as though it’ll take 4-8 hours or longer for things to get more organized.  By that time, the main threat for severe weather will shift east of the I-65 corridor.

Third, with lack of coordination between the upper and lower levels, things are just going to happen in a seeming random fashion this afternoon.  Quick-moving thunderstorms should pop up in a “hit ‘n’ miss” fashion over western and central KY and (mostly)  IN.  Most of these will be strong with gusty winds and hail possible.  Some could even reach “severe” limits, though these are likely to be few and far between.  By 6-7 P.M. the majority of these pop-up storms should be east of the I-65 corridor.  By this time, any severe weather threat should be over for the Louisville area.  Primary threat for severe storms this afternoon will be over central and northern Indiana.

Four,  by 7-8 P.M. the surface part of this system will be better organized and is expected to create a large area of rain and thunderstorms (non-severe)  over western KY and IN.  This will bring us a very wet evening.  Even a little flash flooding is possible.  Rain should diminish shortly after Midnight.

I see from this morning’s CJ  that  Rick and Cal are the two highest paid college basketball coaches in the land.  But, the educational ratings of the schools they coach are low.  We should gain an important bit of knowledge from the first two sentences.

Storms are fading fast as they advance quickly northeast.  Louisville metro will see weak thunderstorms between 6 and 7 P.M.  There is no threat for severe weather – just some brief gusty winds and heavy downpours.

I suspect the NWS will drop the Watch for our area soon.  However, even if they let the WATCH linger, the threat for severe storms is already over.

We’re on the northern edge of a Severe Thunderstorm Watch currently.  Primary concern lies south of Louisville over central KY and, especially, central TN.  Activity is due to a small, but intense upper level disturbance racing over the lower Ohio Valley.  Once again, the upper dynamics are strong, but the lower level instability is quite weak.  For the past  few hours, clusters of thunderstorms have been moving NE from southern/southwestern KY.  A few severe storm warnings have been issued, but it appears most of the storms, while strong, have stayed below severe limits (58 mph winds).  Main factor for us has been the weakening of the storms as they encounter the more stable air mass near the Ohio River.

Main line of storms will push through the I-65 corridor (and Louisville area) between 6 and 7 P.M. this evening.  Strong wind gusts and, perhaps, isolated spots of small hail will be likely as the line passes by.  Overall, these storms should have little affect on our  metro area.

BY 7 P.M. any storm threat for the Louisville are will end.  Any additional threat for severe storms will continue east and southeast of us.

A little late for the big day itself, but some things to remember about St. Patrick:

1).  He was not Irish.  (He was born in England, sold into slavery in Ireland as a child.  He later escaped and returned to England where he became a priest.  Then he returned to Ireland to help bring Christianity to Ireland.

Just looked out the window and saw some (very light) snow.  Large area of precipitation on NWS radar moving slowly eastward should continue the snow for a couple of hours.  No accumulation on  roadways as temperatures are above freezing.  Radar showing a classic “bright band” over Meade and northern Hardin Cos.  That’s the area where the snow is melting aloft and thus creating a change from snow to rain.  That snow-to-rain transition will reach the Louisville area by around 5-6 P.M.

Oh, so close! But apparently not close enough as this morning’s GFS and NAM continue to keep any snow tomorrow afternoon just a bit to our west and south.  Plenty of moisture seems to be available, but both models place the primary area of atmospheric lift about 200 miles to our west tomorrow morning, then curving around to our south by evening.  We’ll be watching a very cloudy sky…most likely with nothing falling from those clouds.

But, we’ll see another chance for light snow/flurries late Monday into Tuesday. 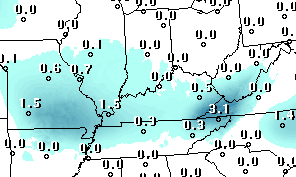 NAM is also trending toward zero.

Today’s forecast models continue the downward trend in the snow forecast they were making earlier this week.  I’ve always cautioned against believing snow forecasts made days in advance.  Too many subtle differences in nature can add up quickly to major changes.  Once again, that seems to be the case.  Here’s the GFS snow forecast from last night’s run: 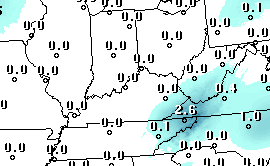 You can see the change over the past few days by checking my last two posts.

Now that the predicted “event”  is closer we can get a much better feel for what’s going to happen.  The GFS has continued to push Saturday’s system farther south, keeping rain/snow confined to areas from southern KY and south.  The NAM also pushes the main system to our south. However, it still allows the northern edge of the snow to extend into northern KY and far southern IN.  This morning’s NAM predicts up to an inch for our area.  The GFS keeps us dry. On a probability of measurable precipitation basis the GFS gives us a 35%  chance while the more encouraging NAM puts it at 70%.

Personally, the GFS seems more reasonable and I’d lean toward the no snow side of the forecast.  However, the GFS’s “verification scores” have been very poor for the past 3-5 days, so there is still reason for hope.

Counting down to Saturday’s possible snow…Yesterday’s GFS forecast can be seen on yesterday’s post.  Here’s today’s estimate from the GFS. 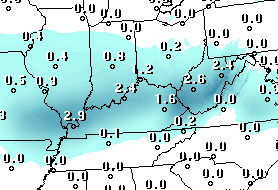