Is the Equinox equal?

The Spring (or vernal) Equinox arrives this evening as the sun will be directly above the Equator at 5:58 EDT.  And, even though the word equinox roughly translates into “equal night”, that’s not exactly true.  The common interpretation for the day of the equinox is 12 hours of day and 12 hours of night.   But if you look at the sunrise/sunset table, you’ll see today has 12 hours 8 minutes between sunrise and sunset.  So, day and night are not 12-12 as most people think.

What accounts for the extra 8 minutes?  Our atmosphere! On its roughly 93 million mile journey to Earth, sunlight travels through a vacuum.  For the last 10-20 miles, however, the sunlight encounters a higher density medium (the atmosphere).  The closer it comes to the surface, the higher the density.  When light travels into a region of higher density, it bends.  This bending is properly called refraction.  Or, in the case of the sunlight and Earth, atmospheric refraction. 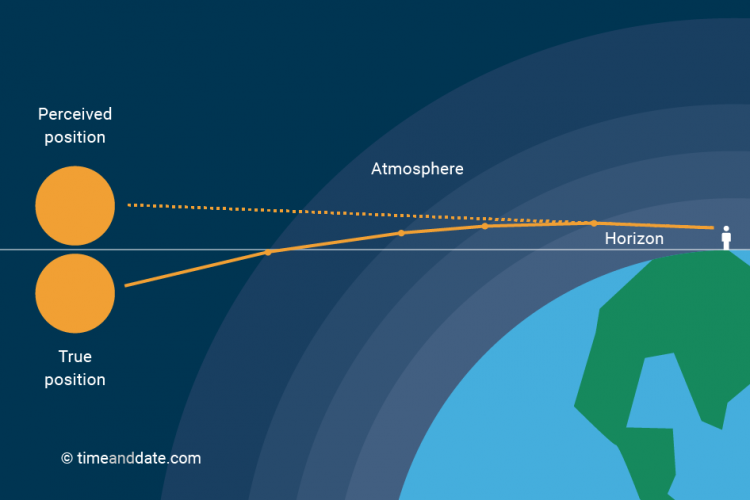 So, when we see the sun sitting on the horizon, it is actually below the horizon.  But, we still “see” the sun because the atmosphere refracts (bends) the sunlight back to our eyes.  From the time we perceive the sun on the horizon until it drops out of our vision, four minutes go by.

So, if the Earth had no atmosphere (we’d be in BIG trouble), sun rise and set would be exactly 12 hours apart.  Because we do have an atmosphere, you must add the extra 4 minutes at sunrise and four more at sunset. Thus, the day of the Equinox has 12 hours 8 minutes between sunrise and sunset

Just trying to wrap things up in a neat little package…

Q.  Why does the moon look much larger near the horizon than it does higher in the sky?

Ans:  atmospheric refraction (plus something called the apparent shape of the sky)                         Note:  The moon on the horizon problem is still considered as the Moon Illusion.  People have been trying to explain it for over 2000 years.  Ptolemy was one the first to try.  His suggestion was very similar to the one I gave above.  But, it’s still under debate.

I know there’s a Tornado Watch in effect, but realistically it shouldn’t include the Louisville area.  Thunderstorms, not especially strong ones, moving through the area at this time were the reason the Watch included us.  But, they certainly are not strong enough to do any “storm” damage here.  Flooding, however, is a different concern.  Additional heavy rains until about 4-4:30 could easily accentuate our local flooding problems.

The current Tornado Watch has a more realistic chance of producing severe storms over the southern half of Kentucky later this afternoon and evening. At this time, the most likely locations for severe weather appear to along the Tennessee/Kentucky border west of I-65 during the couple of hours.  By early this evening, the primary threat will be over southeastern KY (mostly east of I-75).

The current storms in Louisville area are bringing northerly winds in their wake.  That means cooler and drier air will slide in after 4 P.M.  That means “goodbye” to any severe storm threat for us.  I hope the Storm Prediction Center catches on to this and drops us from the Watch area.  Based on past experience, that won’t happen.  The horse is dead guys, you can stop beating it!

Heaviest part of storm cluster has now moved into Oldham, Shelby and Spencer Counties.  And, it looks weaker.  Still some renewed flooding concerns, but probably not much.  Any threat for severe storms is over for anybody within 35 miles or so of Louisville.

Skies should clear tonight, so early risers tomorrow morning should get a good view of a total eclipse of the moon.  It’ll be “total” for a shorter time than usual (less than five minutes) and harder to see thanks to the morning light, but still it’s a chance to see a relatively rare event.  For full details visit:  www.spaceweather.com 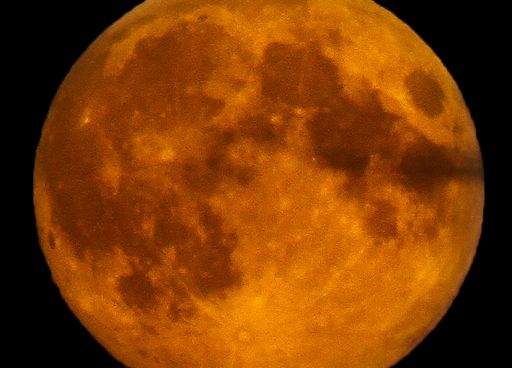 It’s back!  The pleasant, mild, dry days of August.  Now there’s a statement you don’t here too often.  But, this summer has produced an abundance of them with at least two more to go in this current sequence.  Clear, cool nights should produce nighttime lows in the lower 60’s (upper 50’s rural areas) while daytime highs return to the upper 70’s tomorrow then slowly warm into the 80’s Thu/Fri.  A situation somewhat similar to the one we had this past weekend appears to be shaping up in the longer range guidance – we’ll just have to wait and see.

Super Moon among the missing.

Thanks to the clouds and showers most of the lower Ohio Valley didn’t get a chance to view this year’s “Super Moon.”  Super moon is the name given to the full moon that occurs when the Earth-Moon distance is the least of the year.  The distance between Earth and Moon varies because the Moon revolves around us in a slightly elliptical orbit.  The super moon can be as much as 14% larger and normal full moons and up to 30% brighter.  The photos below are from www.spaceweather.com.   The comparison was made by Vese Vauhkonen of Finland.

Here are some others 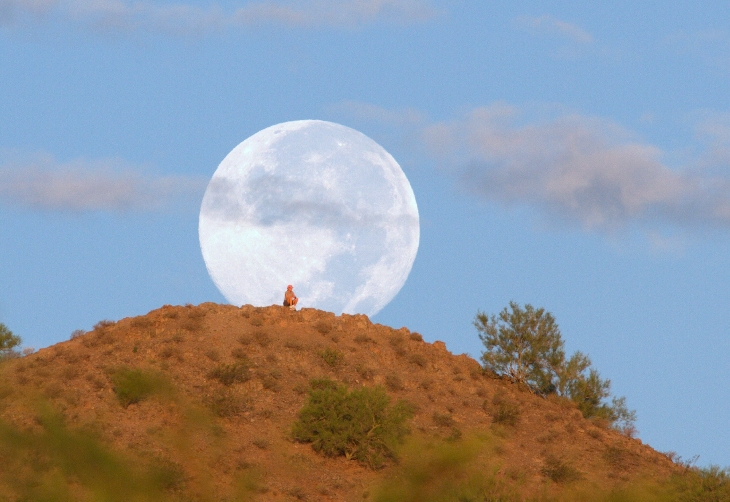 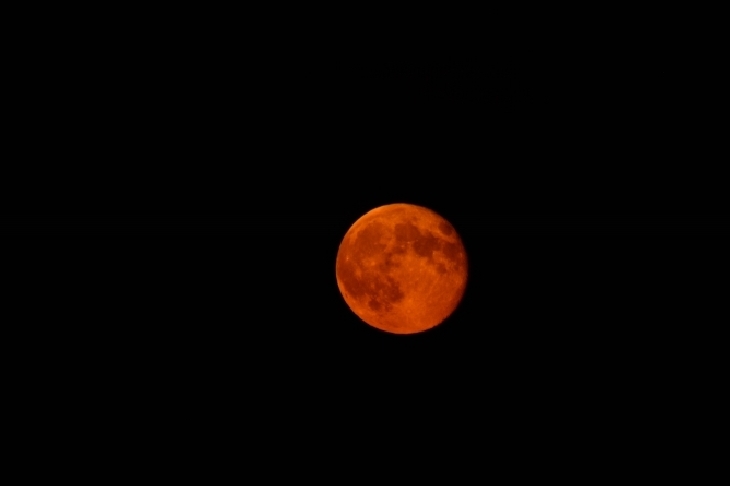 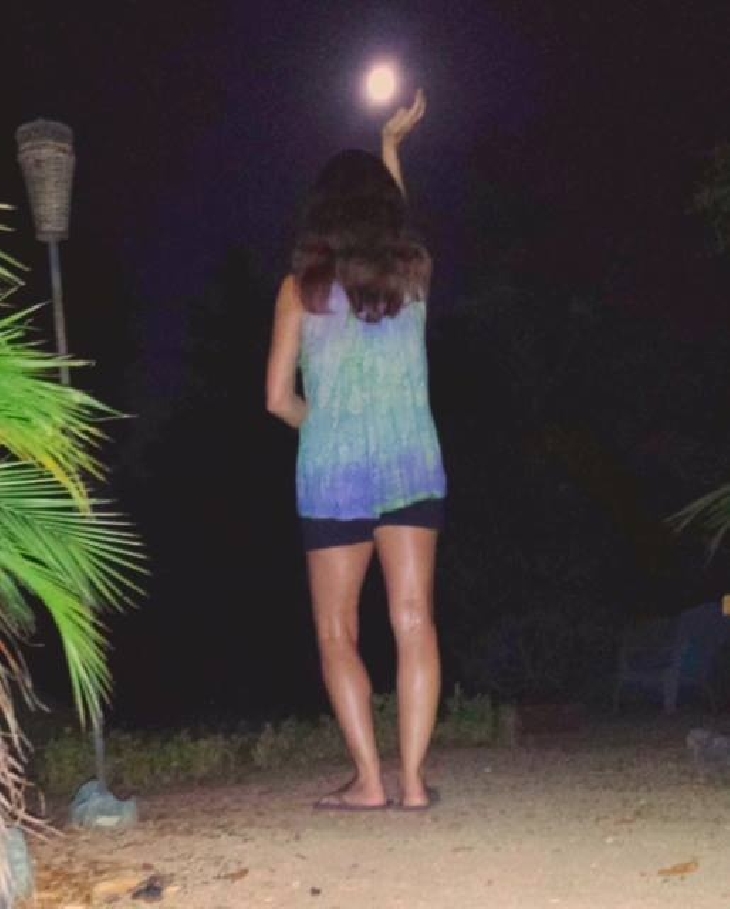 Pretty calm weather – much like the weekend – will continue through Wednesday with temperatures rising a few degrees.  Next chance for rain looks like Wednesday night and especially Thursday.

About 10 years ago the European Space Agency launched a space probe to visit a comet.  We’ve had a few fly-bys during the space age, but this one has different purposes.  Rosetta, as the probe is commonly known, is due to reach close to the Comet 67P/Churyumov/Gerasimenko  (Comet C-G  OR 67P for short) on Wednesday.  It will go into orbit around the comet and map its surface, looking for an appropriate landing space for the module Philae which has gone along for the ride.  If all goes well, a landing could take place as early as November.  So, while Rosetta studies what actually happens while a comet approaches the sun, Philae will try to find out exactly what the comet is made of.  It will be a phenomenal achievement (and knowledge advancement) if everything works as planned.  Keep your fingers crossed…the big news starts Wednesday.

Meanwhile, ESA recently issued this photo from Rosetta… Comet C-G  is shown about 1000 km from Rosetta. 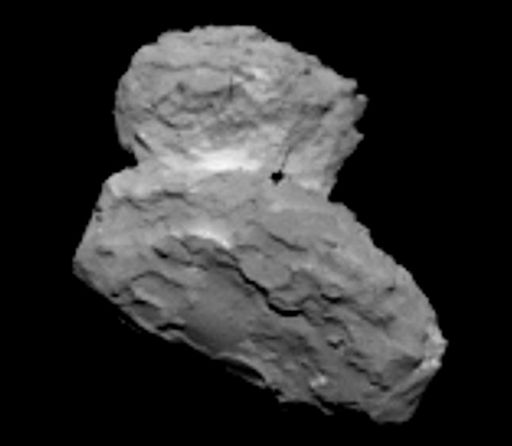 Very pleasant (and unusual) July weather continues and should last, although with slowly warming day by day through Thursday.  When we get these below normal temperatures they are brought in by upper level troughs (basically a huge pocket of colder than normal air aloft.  This destabilizes the atmosphere so that daytime heating tends to generate a large amount of afternoon cloudiness.  You saw it yesterday and we’ll see it again today and tomorrow.  Sometimes there is enough moisture to produce a small amount of precipitation.  An example is snow flurries after the arrival of a blast of cold air.  When it happens in the summer, once in awhile it generates some small, light showers.  Today’s models bring in a little more moisture than yesterday, So, is possible we could see a few brief showers this afternoon and evening, especially over southern Indiana.

Starting Friday, the chance for rain will return.  GFS and NAM are pretty weak with this next system.  It will definitely be moisture-shy as upper level winds will stay from the northwest.  So, it’s a good thing we got some pretty good rains last weekend.

The summer’s best time for viewing meteor showers comes in August with the Perseid Shower.  This year’s peak is expected to be August 11-13.  However, it won’t be nearly as “viewable” as most years.  The peak coincides with the largest, brightest full moon of the year.  So, the usual predictions of “up to 120 per hour”  have been lowered to about 30 per hour.

Astronomers have been watching the skies for possible asteroids that could be on collision paths with Earth.  As of today, we know of 1493 Potentially Hazardous Asteroids. These PHAs, as they are commonly known are defined as asteroids which are greater than 100 meters in diameter and have orbits that bring them within 5 million miles of Earth.  An impact would be devastating to our Earth, but at this time none is known to have an orbit that would create a direct impact here.  That’s the good news, the bad news is that PHAs are still being discovered.

The average American uses  about 168 gallons of water a day.