Both surface and upper air components of the atmosphere are converging on a major “sweet spot” where (and when) ample supplies of severe storm ingredients will come together soon.  A major outbreak of severe weather is expected with large hail, strong winds and tornadoes all looking likely.

WHEN:  The arrival of the strong storm ingredients should occur over the southern parts of the states listed above around 6 P.M. EST.  The most severe activity will continue for about 8-12 hours.  The prime conditions will uncouple after that and activity will diminish tomorrow morning.  Additional strong storms (but not as strong as tonight’s storms) may reform tomorrow afternoon over eastern KY.

A storm system developing over central Missouri now will rapidly intensify under a very strong upper air flow over the Mississippi Valley and reach the Great Lakes by morning.  Trailing the low pressure will be an eastward moving cold front.  As the front moves into the warm, moist air thunderstorms will break out this evening and accelerate northeastward.  The strong wind fields aloft will have no problems converting the thunderstorms into severe weather-makers quickly.  During the evening, the biggest problems will be over ne TX, east OK and AR.  By Midnight, the greatest threat pushes northward into eastern MO, IL and western IN.  From Midnight until about 6 A.M., the models put a  “bulls eye” over southern IL and southern IN for the greatest damage risk.  NOTE: although the models zero in on the area north of the Ohio River, a few isolated severe storms could develop over western KY counties bordering the Ohio River.

By 6 A.M. the severe storms should be over, or at least diminishing.  By that time the remaining lines/clusters of thunderstorms will be approaching the Louisville area.  The primary area of rain/storms should push through the I-65 corridor between 8 A.M. and Noon.  Some strong winds may still be possible, but the primary threat for our area will be flash flooding.  After the periods of heavy rain today, the ground is saturated.  Additional heavy downpours tomorrow morning would be enough to trigger brief flash flooding.

The cold front is expected to pass though the Louisville area about Noon tomorrow so any additional severe weather generation tomorrow afternoon will be over eastern KY.  Meanwhile, we’ll start a drying process during the afternoon as cooler air arrives.

Sunday night’s big Oscar blunder wasn’t the first time that has happened.  But, the first time it happened, the category wasn’t a major one.  In 1964, the “Best Music Score”  award was announced for the movie “Tom Jones.”  But that movie wasn’t even nominated!  The actual winner was Andre Previn for “Irma La Douce.”

Another strong storm will come out of the southern Rockies and push toward the Great Lakes by Wednesday.  This is a classic severe storm set-up, but the likely timing of the system currently puts us into the very low side of severe storm possibilities.  The highest risk areas will be west of us tomorrow afternoon/evening and east of us for Wednesday afternoon.

The past two similar systems were moisture-shy.  In both cases, nothing of consequence happened locally – thanks to that lack of moisture.  This time, however, there will be plenty of moisture in the equation.  So severe storm outbreaks appear likely tomorrow and Wednesday, but, as mentioned above, the main part of the storm system will reach us during the lull between the two outbreaks.

Here’s how it’s shaping up…a warm front will push through the lower Ohio Valley tonight and tomorrow morning.  This will bring high moisture content into the area.  The front should generate a few hours of showers (and possible thunderstorms) tomorrow morning between about 7 A.M. through Noon.  Any thunderstorms that form tomorrow morning could produce small hail. Then, we’ll see a windy and warm afternoon with temperatures nearing 70 degrees.

During tomorrow afternoon/evening thunderstorms will develop along a cold front from Arkansas to Missouri into Illinois.  A widespread outbreak of severe weather is expected.  As the night continues this cluster of severe weather will drift eastward and weaken.  It is expected to drift through the I-65 corridor Wednesday morning remaining in the weakened state.  Then, Wednesday afternoon it is expected to re-intensify into another area of strong to severe storms as it moves east of the I-75 corridor.

Even though the severe threat looks quite low for the Louisville area, the two (or more) rain systems we expect could easily drop !” to 1.5″ of rain by midday Wednesday.

Each panel of glass on the Grand Canyon Skywalk can safely hold 800 people even though the glass is only 2.5″ thick.

Moisture is still iimited and models continue to pay far more attention to northeast IN and MI.  Cold front should pass through Jefferson County between 8:30 and 9:30 P.M.  Some strong gusty winds are likely with the front, but winds should NOT reach the 58 mph range (needed to be called “Severe”).

A strong storm forming between St. Louis and Chicago will intensify rapidly during the day as it moves quickly northeast into Michigan.  North and west of the storm track heavy snow is likely.  However, the “warm sector” south and east of the storm will remain dry most of the day as we wait for a supply of moisture to arrive from the south.  Once the moisture gets north,  the strong dynamics of the parent storm should have no problem producing some severe thunderstorms.  Primary threat will be strong winds.  Hail is a slight risk while tornado chance is pretty close to zero.

This system is similar to the last time severe weather was widely advertised, but failed to show up.  The problem is with the moisture.  The dynamics with the system are tremendous, but the thermodynamics are quite weak.  So, once again, the various models are relatively low on the “probability” of storm formation, but the so-called “conditional probability” for severe storms is high.  What that means in normal people-speak is that the overall chance for a thunderstorm hitting you is small (about 30%).  But IF a thunderstorm forms, there is a high chance it’ll reach severe levels (about 50%).    So, if you multiply the two numbers you get a roughly 15% chance for severe winds within 25 miles of your home tonight. Obviously, the chance at any single point (your home)  is much lower.

The models agree well on timing.  The arrival of the cold front trailing the surface storm and sufficient moisture to generate thunderstorms should be about the same time.  Best timing for Louisville looks like between 8 and 10 P.M.  While some storms should form west of Louisville earlier, this system shouldn’t get well organized until it gets east of I-65.  Areas east of Louisville have a greater chance for wind damage than we do.  Best chance looks like 9 P.M. until Midnight for areas east of I-65.

A weak Alberta Clipper will push rapidly eastward across the lower Great Lakes tonight.  Gusty southerly winds ahead of this system will bring us another unseasonably warm day although those winds are having trouble bringing moisture northward.  However, it does appear likely we’ll see a little rain late tonight as the Clipper’s cold front pushes through.  Rain will probably be only a few hundredths of an inch and end around daybreak tomorrow.  Another windy day Sunday, but this time the winds will be from the northwest.  Thus, colder weather – temperatures will be slowly falling through the 50’s during the day.

Got these from http://spaceweather.com   They show a funnel cloud near Rio de Janiero a few days ago.  They did not touch down and caused no damage.  In Brazil they are called “tubes.” 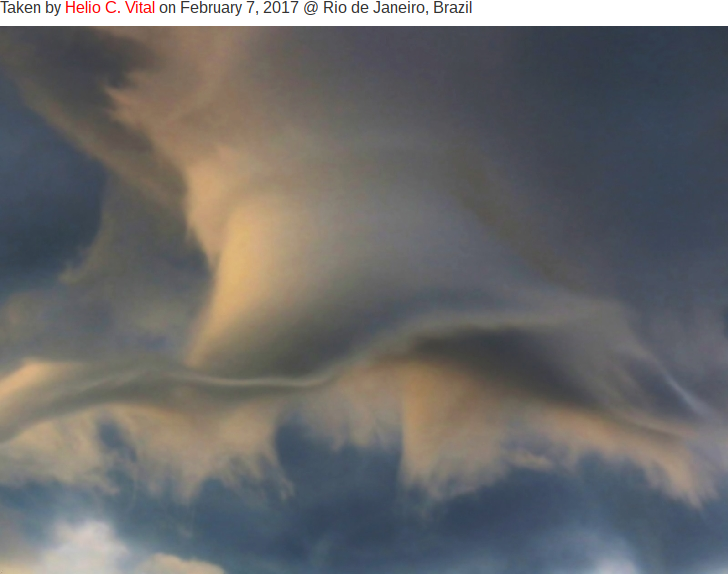 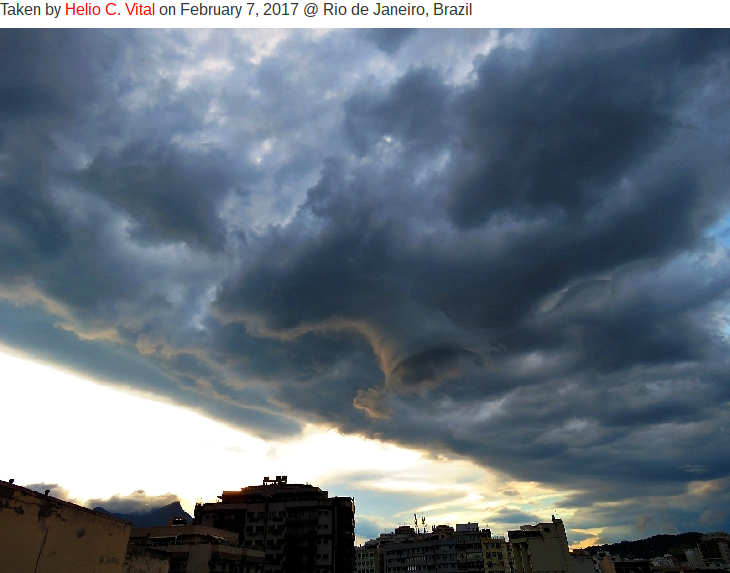 Yes, it appears that thunder and lightning will be visiting our area during the late night hours tonight.  Also, the Severe Storms Center has us in a “slight” risk area for severe thunderstorms tomorrow.  However no severe storms are expected with tonight’s rain/thunder/lightning.

The situation looks like this:  a weak upper air disturbance will float slowly over the Ohio Valley between (roughly) Midnight and Noon tomorrow.  This system is starting to pick up some  Gulf moisture and rain/thunderstorms are popping up over northern TX, AR, west TN and southern KY.  Rain should become widespread over our area after Midnight and finally end around midday.  Thunderstorms will be embedded in the rain shield with the best chance for thunder here about 5 A.M. to 10 A.M.  Overnight instability will be low and the upper air dynamics, while good for an April/May severe weather situation, are actually pretty low for a winter system.  As a result, I don’t expect any severe storms overnight or tomorrow morning.  The dynamics aloft will have a hard time overcoming the lower level thermodynamics.

Then, atmospheric conditions change tomorrow afternoon/evening.  The morning system will drag most of the deep layer of moisture northeast of us.  But, a cold front will be approaching from the northwest.  The dynamics with this coupled surface/upper air system are expected to be much stronger than the overnight system.  However, most of the moisture will have disappeared.  So, the chances for thunderstorms to form along this front are quite small – about 10-20%.  But, if thunderstorms do manage to form, strong gusty winds and hail will be likely.  So, severe storms are possible late tomorrow afternoon , but the chances we’ll have any in the area are less than 10%.  Not much to worry about.  (But a few flurries will be possible early Wednesday.)

A couple of weeks ago, a major change in the upper air pattern looked like a good possibility for North America for this month.  The models were leaning toward temperatures being below normal for much of this month.  That trend lasted several days, but since then has shifted back to the primary pattern it has shown much of the winter – cold and wet over the western states and warm and wet over the east.  It looks well locked in, so not much hope for snow lovers.  Bad winter in that regard.

It was amazing to watch New England turn the tide and rally last night.  You’ve got to give Tom Brady and the Pats credit for putting themselves to win the game, but to my mind, they NEVER should have won the game.  Atlanta just outright “gave” the game away.  With time running out, Atlanta had a second down with the ball in easy field goal range AND an 8 point lead.  Keep the ball where it was.   Run down the clock with a couple of runs – kick the field goal – game over – Super Bowl winners!  But, wait!  Somebody (I assume it was the offensive coordinator) calls a pass play that requires a deep dropback  by the quarterback.  Play starts, qb drops back and gets sacked.  13 yards lost – no longer in field goal range – Patriots get the ball back with a chance to tie the game.  And, they did –  then made it look easy in overtime.

Whoever called that play must have thought he’d catch New England off guard.  Seattle thought the same thing two years ago.  Look where it got them.

The popcorn you buy at a movie theater costs more per pound than a filet mignon.