Here’s the latest prediction from the GFS 2.5 km model: 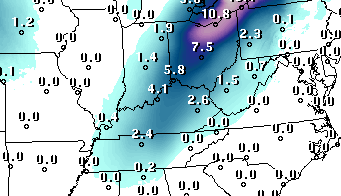 Looks exciting, doesn’t it?  But don’t get too excited yet.  This prediction is definitely an outlier, at least so far.  The GFS ensemble shows(a group of GFS models run under slightly different starting conditions) shows a wide range of possible solutions for this future storm.  The Euro and Canadian models also are much lower with their forecasts.  But, it’ll fun to see how it develops this week.

The short term models have, as expected, all gone to a forecast for the Louisville area which consists of almost all rain tonight and tomorrow morning AND  a few periods of sleet/snow mixed in.  But, essentially we’re just looking a a rain situation locally as temperatures remain above freezing all night.

Doesn’t look like the NWS has given up on its icy prediction yet.

Which precipitation type will dominate tonight?

Forecasts have been calling for snow and/or sleet and/or freezing rain and/or rain for tonight and Monday morning for several days now.  But, as we get closer to the event, the actual sequence of events seems to be coming into clearer focus.  The computer models are still quite varied – I’ve just looked at five different models and the results still are different.  One says mostly snow, another says mostly freezing rain/sleet, two say about a fifty-fifty split between icy types and rain, while another one predicts mostly plain old liquid rain.

So that aspect of the models doesn’t provide much help.  So maybe it’s time to put a little common sense human forecasting to work.  One thing the models do agree on is surface temperatures.  In general, they all hold surface temperatures above freezing overnight and tomorrow.  Thus, any icy precipitation that mixes in should melt on roadways.  Concrete sidewalks and roadways could get a bit icy late this evening.  Once precipitation begins this evening, temperatures will drop  few degrees for an hour or two.  During that time we’ll see our best chance for icy precipitation mixing in with rain.  After midnight, by far the dominant feature will be rain as temperatures rise into the mid to upper 30’s by morning.

So, summary, when all is over, this system should cause only a few, if any, problems for the Louisville area any all roads should be fine (although wet) for rush hour.  However, north and northeast of Louisville more ice will mix in, especially those areas which still have some snow on the ground.  Numerous road problems are likely in these areas.