That pesky upper air ridge of high pressure is once again building strength over the Ohio Valley, so it appears we’ll be back into hot and humid weather again and Friday.  Once again, daily highs should be 90 or so with the heat index at 95-98 deg.

By Saturday, the ridge is expected to erode considerably as the upper westerlies strengthen and dig southward.  That could produce some rain as it brings in cooler, drier air.  If we are lucky, the next two days may be the last time we see 90-degrees this year.

Remember Al Gore’s famous pronouncement that Sea Ice in the Arctic summer would disappear by 2013 or 2014 (depending how you interpreted his statement)?  Well, the melt season ends in a week or two – so what’s the status of the ice?

The ice is doing very well, thank you.  The chart below shows this years ice currently is about 5.2 million square kilometers. That’s still below the long-term average, but has building for the past two years.  And, this year’s ice is also thicker than recently – more evidence that the ice should continue to increase.  By the way, the Antarctic Ice Sheet reached record HIGH levels this year. 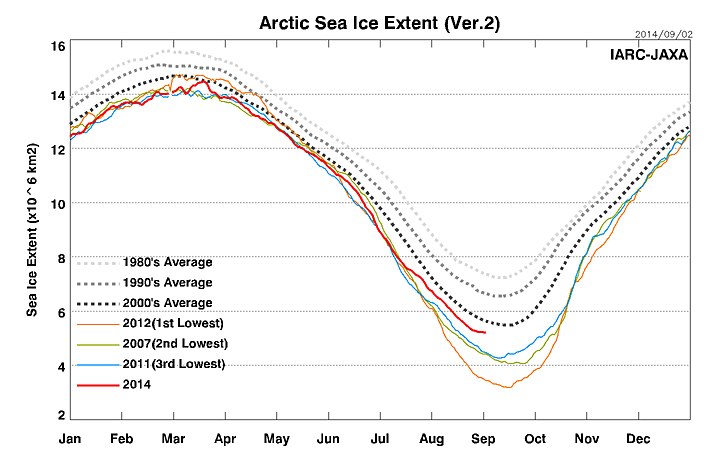