A cold front crossing central IN/KY now is producing scattered very light showers.  The showers will move east of I-65 by 7 P.M. Maximum rainfall should be .02″ to .03″.  Much of the area should get only a trace of rain.  The rain will exit the area several hours before near freezing temperatures arrive, so no snow is expected this time

After 7 P.M. the Arctic air pushes in to set the stage for a very cold end to January.  Tomorrow won’t be too bad as temperatures remain in the 20’s all day.  Morning low will be around 20 with an afternoon high in the mid 20’s.

Wednesday will be the coldest day with a morning low near 8 degrees at the airport but afternoon highs only in the mid teens.

Thursday starts with a low only a couple degrees on the plus side of zero, but with afternoon temperatures rebounding into the 20’s  Warming continues Friday.

With the cold air in place we’ll continue to see chances for flurries/light snow here as weak upper air disturbances pass overhead.  At this time, it looks like our best chance for a dusting will be Tuesday night into early Wednesday

Light pillars are rare.  They require ice  crystals and man-made light.  Enough ice crystals for the pillars to appear usually only happen with clear air and very cold temperatures –  such as sub-zero cold.  Mia Stalnacke of Kiruna Sweden sent this photo to http://www.spaceweather.com recently. 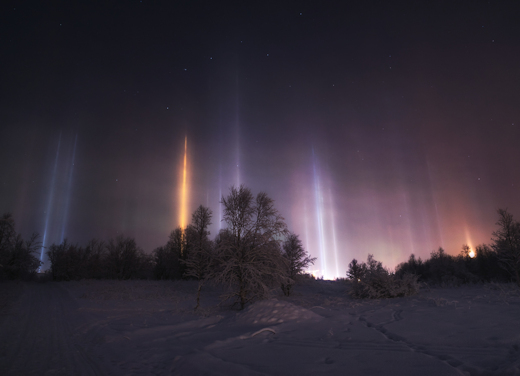 The orange pillars  are created by sodium vapor lamps while the blue-white ones are from LEDs.