Big winds last night, but they couldn’t push in much cold air.  Wind direction stayed from the SW to W last night and today, so not much cold air pushed southward.  And as winds go back to SW  tomorrow, a very quick warm up is due.  Temperatures are expected to reach about 60 tomorrow.

Then, a weak cold front will pass by tomorrow night with a small (20%) chance for some rain showers after midnight.  Then some colder air arrives for Friday.  And with the colder air, the chance for some light snow returns as well.

Two weak upper air disturbances will arrive from the west coast.  The first one arrives Friday night and (at this time) appears as though the southern half of KY could see an inch or two of snow by Saturday morning.  We’ll be on the northern edge of this system and any snow we get would be less than an inch.  NOTE:  At this time, this system is very “iffy”.  The description above is portrayed only by the GFS.  The NAM pretty much ignores this system.  So, I suspect we’ll be hearing changing forecasts in the next few days.

The second system is expected to be a little stronger.  It arrives Saturday night and continues into Sunday.  Temperatures are likely to remain above 32 during this event.  The majority of the precipitation will be rain and/or drizzle.  However, it may start briefly as some light snow.  The GFS and NAM are in pretty close agreement with this system.

The Ohio’s still above flood stage and climbing slowly.  Crest is still expected Friday at around 28′ to 28.5′.  However, the river will fall slowly and will not drop below flood stage until next week.

A major storm rocked Hawaii Sunday and Monday.  Some coastal waves were estimated to be as high as 60 feet!  A wind gust of 191 miles per hour was recorded.

The Haleakala Observatory, which sits atop the 10,023 foot Haleakala Volcano on Maui, contains several of the worlds finest telescopes.  They were frozen in place and covered with snow. The photo below is from Monday’s snow. More snow was expected Wed/Thu. 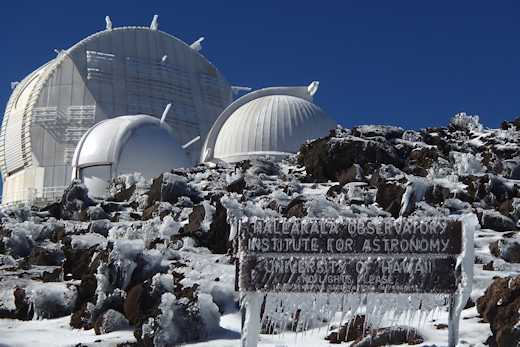