The model trends mentioned this morning are starting to fall into place.  A strong cluster of thunderstorms has formed over northern IN and parts of western OH.  This is expected to consolidate into a large system and spread SE over OH into far NE KY and West Virginia.

Next system is starting to appear over northern IL.  It is also expected to strengthen and spread SE – mostly likely staying north of southern IN and the Louisville.  This system should be spreading north of us this evening – 8 to Midnight.

The piece of atmospheric energy we are concerned about for us is a disorganized area of scattered thunderstorms over southern MN, WI, Iowa and western IL.  This system looks to be the biggest of the three and should travel SE farther south than the first two.  It looks likely we’ll plenty of Severe Storms over IL and Western IN this evening until Midnight or later.  What’s left of the system should then begin fading as it moves toward the Louisville area.  Some thunderstorms could arrive here as early as Midnight, but it appears as though the best chances will be around 2 A.M. and, even more likely between 5 and 9 A.M.  All rain is expected to end  by late morning

The severe storm threat still looks very low within 35 miles (or so) of Louisville.  But, if anything “severe” is going to happen. 5-8 A.M. would be the most likely time. 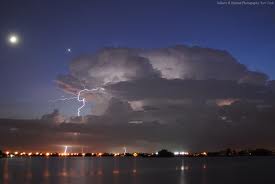