Yesterday’s showers danced around the area with little to show for their efforts.  One exception was a narrow area of .25″+ rain from near LaGrange eastward into western Henry County. I have my sprinkler running right now.

Meanwhile pleasant weather will continue through tomorrow although it’ll be a little warmer in the afternoon.  The weekend should get off to a pretty good start – partly cloudy, upper 80’s and more humid on Saturday.  Then, we’ll begin to feel the effects of yet another upper air trough digging south into the Great Lake and Ohio Valley regions.  We’ve seen a lot of these systems this summer and have enjoyed the cool weather they’ve brought.  But, although they look very promising for rain several days in advance, lately they have failed to deliver on that promise.  Currently, the models are painting a large stripe of 1″ plus rains over the area.  But, even now, the models are putting some “red flags” on the rain outlook.  They are locking in on Midnight Saturday night until Noon Sunday as the preferred time for the most energy to be near us.  This time of year, that’s often a death trap for rain.  But, I’m sure there will be some changes to that outlook before Saturday.

Found the photo below from  www.spaceweather.com  Photographer was Stine Bretteberg and photo was taken in northern Norway. 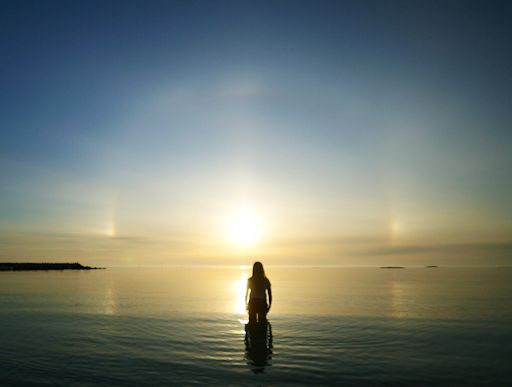 We are accustomed to the sun rising in the east and setting in the west.  But it’s not that way over all the earth.  Over polar areas of the Northern Hemisphere the sun never sets on the date of the Summer Solstice (usually June 20 or 21) and for several weeks either side of that date.  It’s commonly known as the Land of the Midnight Sun.   So, if the sun doesn’t set, what does it do?  It goes around and around in circles.  It starts in May as the sun hugging the horizon.  Each day until the solstice, the sun gets higher in the sky as it circles around the horizon.  After the solstice, it slowly winds back down.

The photo was taken around midnight with the sun sitting on the horizon while a layer of ice crystal clouds (cirrostratus, for Latin lovers) is in the sky.  As a result, several optical features all appear together.  First, the midnight sun; second, A large halo around the sun; and third, a set of sun dogs (parhelia) sitting in the halo at the horizon.  The Sun Dogs are the bright spots (often they have the colors of a rainbow faintly displayed) seen near the horizon directly east and west of the sun.

Talking about the sun’s behavior at high latitudes brings to mind an old story from a college textbook.  It seems an agricultural group , upon hearing about the sun’s polar activity, decided that would be the ideal place to raise sunflowers.  So they packed up some gear and headed off to the Land of the Midnight Sun and set of a greenhouse and planted their sunflower seeds.  At first, everything went well – the plants grew quickly and were tall and  e healthy.  Then, when the flowers started to grow, they did what sunflowers do – they followed the sun around and around and around until they slowly strangled themselves to death!