Earth Day should be a day of joyful ceremony and celebration.  But, instead, it’s more of a horror show – full of predictions of death, misery, etc.  In general it’s a day of dire warnings of horrible doom and gloom in our near future.  And, of course, the fault is all ours.

2).  Food was a scarce commodity in the first half of the 20th Century.  Now, thanks to a warming Earth, modern technology and higher carbon dioxide levels, food is abundant.  (So abundant in fact that in the U.S.  much of our corn production is not even eaten.  Rather, it goes to making ethanol which is then mixed with gasoline to make our cars run less efficiently.  In addition, the production/distribution of ethanol produces MORE carbon dioxide than it saves as a fuel!  Only in America!  I digress.)  Today, estimated global food production creates an equivalent of roughly 2800 calories per person per day.  Past Earth Day predictions foresaw mass starvation and global wars over food by now.  Unfortunately, food distribution is largely a political problem, so food is not shared equally.

3).  Earth Day sages have also missed on may other smaller scale predictions.  As it turns out Al Gore’s famous photo of a polar bear floating on a lonely, small iceberg was photoshopped.  Polar bears were not disappearing.  In fact their population is now higher than ever recorded.  Arctic Sea ice has not disappeared.  In fact, sea ice yearly minimums have actually be increasing over the past decade.  Global hurricane production/intensity has not increased in the past 3-4 decades.  (Yes, there’s been a lot more damage – because we keep building stuff on barrier islands.)  The frequency of winter storms has also shown no increase.

In fact, there have been articles floating around the internet recently “grading” 49 years of Earth Day predictions.  So far NOT ONE has come true!  And this year’s theme – species extinction – is sure to keep the Earth Day score unblemished.  Here it is:  30% to 50% of Earth’s species will be on the final road to extinction by 2050.  They’re calling it the 6th Great Extinction.  Interestingly, even if the prediction were to somehow prove to be correct, Earth would still have more species than BEFORE the last Great Extinction 65 million years ago.

So, what’s all the fuss about carbon dioxide?

There’s a very vocal sect with a religious-like  fervor that believes that increasing carbon dioxide is going to kill us all.  They don’t seem to realize that carbon dioxide is an extremely beneficial gas.  After all, life on  Earth is carbon based.  Many times in the past carbon dioxide levels have been much higher than now.  Most of the past 10,000 years Earth’s temperature has been higher than now.  We are still recovering from the Little Ice Age (started in the 16th century and ended about the mid 19th century).  The rate of global warming from the late 1970’s to about 2010 was just .1 deg. F more than a similar 30-year period at the start of the 20th Century.  So, it’s not so unusual.  Only then, nobody thought it was the beginning of the end of the world.

But, there is some concern about rising atmospheric carbon dioxide.  How much?  We just don’t know.  We’ve all heard/read estimates that a rise to about 550 parts per million would warm Earth by 3 to 8 degrees C  (5-14 deg F).  All those estimates come from computer modelling of the atmosphere.  Luckily, none of those models has ever shown much skill at its assigned task.  And, there are also additional problems with some assumptions the models make.

One thing we do know (at least we think we do) is if you only consider carbon dioxide and nothing else, Earth’s temperature should rise about 1 deg F.  for a carbon dioxide level of 550 ppm.  No big deal.

That’s why Earth Day should be a day of celebration rather a rant of doom and gloom. 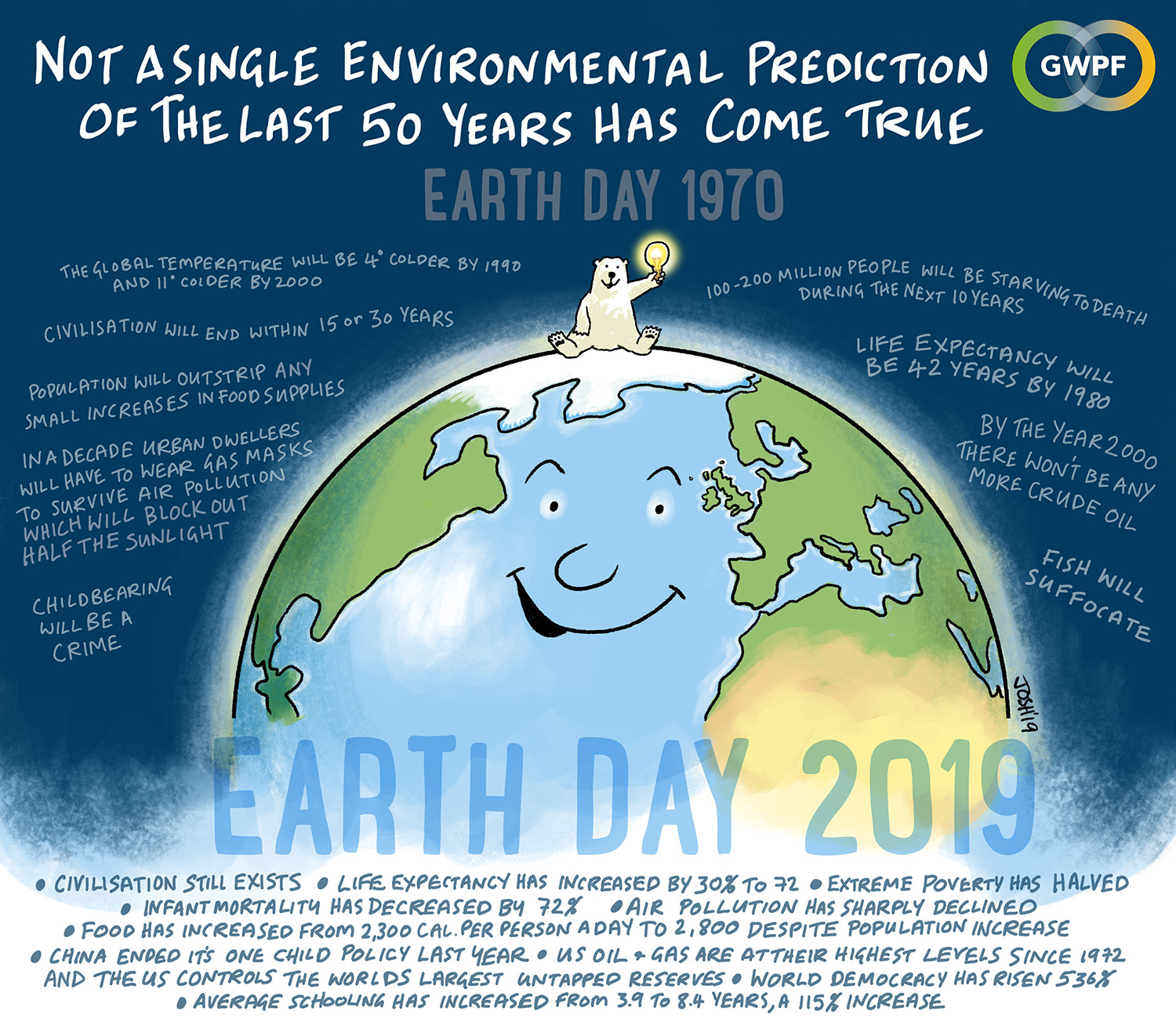